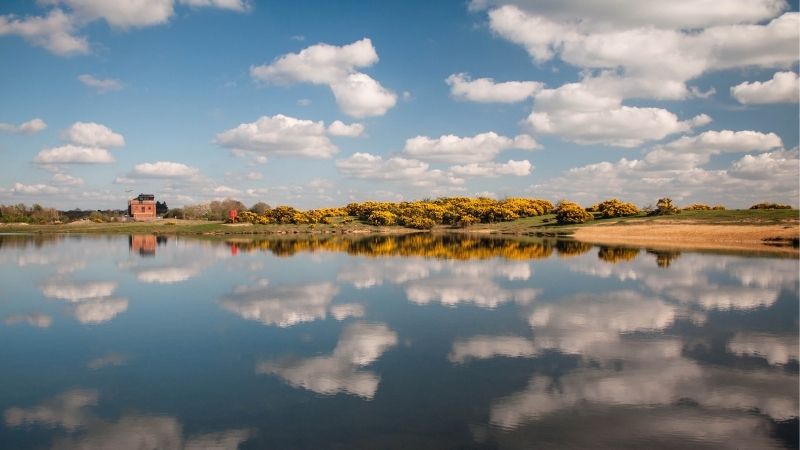 For centuries, Greenham and Crookham Commons remained unspoiled, with just a few archaeological remains testifying to the lives of its early occupants. By the 19th century, smallholdings, farms and country houses appeared on its wooded margins.

With the outbreak of war in 1939, the rural idyll was shattered and for the next half-century, the Commons were fenced off as a major airfield arose on the site. During the 1980s the United States Air Force based cruise missiles there and the site became an international focus for anti-nuclear protest. You can learn about the history of Greenham Common at its Control Tower museum and visitor centre.

Since reopening to the public, Greenham and Crookham Commons have become a popular venue for a range of activities, from wildlife walks to unique cultural events. Greenham Common is also the home of Newbury’s Saturday morning Parkrun, one of the most well-attended Parkrun events in the country thanks to Newbury’s strong running community and the stunning location provided by this very special place. It starts on the remains of the runway, which was once used by the Royal Air Force, the United States Army Air Forces, and the United States Air Force.

Nowadays there are free-roaming cows, horses and ground nesting birds in place of aircrafts, and beautiful lakes, greenery and wooded areas to enjoy along the myriad of footpaths spanning both commons. It’s a dream for walkers, runners, cyclists, dog walkers, wildlife fanatics, and history lovers, and if you’re lucky enough to catch the sunrise on a good day, you’ll be transported to another world entirely.

Greenham Common, particularly its redundant nuclear missile bunkers, is also famous as a filming location, having most notably provided a backdrop for Star Wars: Episode VII – The Force Awakens in 2015.

This website uses cookies to improve your experience while you navigate through the website. Out of these, the cookies that are categorised as necessary are stored on your browser as they are essential for the working of basic functionalities of the website. We also use third-party cookies that help us analyse and understand how you use this website. These cookies will be stored in your browser only with your consent. You also have the option to opt-out of these cookies. But opting out of some of these cookies may affect your browsing experience.
Necessary Always Enabled

Performance cookies are used to understand and analyse the key performance indexes of the website which helps in delivering a better user experience for the visitors.

Analytical cookies are used to understand how visitors interact with the website. These cookies help provide information on the number of visitors, bounce rate, traffic source, etc.

Advertisement cookies are used to provide visitors with relevant ads and marketing campaigns. These cookies track visitors across websites and collect information to provide customised ads.

Other uncategorised cookies are those that are being analysed and have not been classified into a category as yet.

SAVE & ACCEPT
Powered by