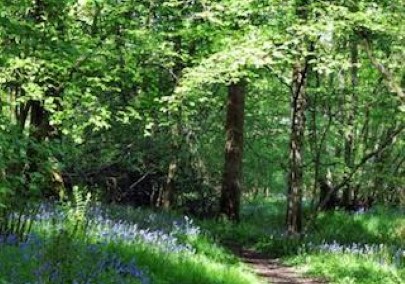 A living landscape
Stretching from the vast heathland at Greenham Common down to the River Kennet, this reserve forms part of the West Berkshire Living Landscape, a wildlife trust project to create space for wildlife and people together.

From bomb site to wildlife haven
The Bomb Site is so named because it was an ammunition store during and after the Second World War. It is a great example of how nature can thrive and develop on a site vacated by people. Many old surfaced tracks create a network through the young birch and oak woodland that has colonised the site. Try the 3/4 mile wildlife walk from the car park – it’s on old surfaced tracks and ideal for less mobile visitors.

Bowdown walk
This magical dense ancient woodland gives views across the Kennet Valley. A clearing through the wood creates sunny areas where butterflies bask. Look out for the spectacular silver-washed fritillary and the handsome white admiral. The 1-mile wildlife walk takes in some damp clay areas on the lower slopes and steep climbs up to higher, drier ground.

Baynes walk
This is the most secretive part of the wood. The dense ancient woodland here has lots of streams and some steep paths. The cool green is a lovely contrast to the open heathland areas. The 1-mile wildlife walk has some steep sections, steps.

“Peaceful and magical – a wildlife-rich mosaic of woodland, heathland and meadow.”