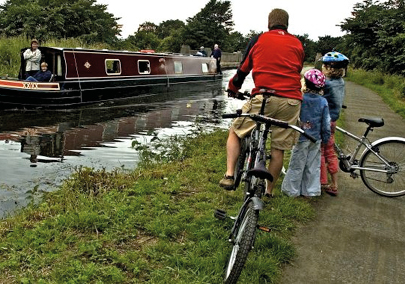 The Kennet and Avon Canal, which celebrated its bicentenary in 2010, forms an important route from east to west across West Berkshire. Although completed in 1810, the canal was developed from the early 18th century Kennet Navigation, when this river was made navigable for barges between Reading and Newbury by dredging the riverbed, cutting lengths of canal and building a series of locks.

Construction of a further canal from Newbury to Bath began in 1795, in order to create a trading link between the River Thames and River Avon. The engineer for what became the Kennet and Avon Canal was John Rennie, one of the great designers of his age. The canal was predominantly cut by hand by labourers who became known as Navigators or Navvies. The channel was lined with puddled clay, and brick and stone used to build bridges and most lock chambers. Lock gates were made from timber. The canal cost about £16,666 a mile to build, higher than average for the period.

As the canal network grew during Britain’s Industrial Revolution, it became the easiest way to transport heavy goods around the country, faster than the badly maintained roads and safer than a sea voyage. Horse-drawn boats carried cargoes such as coal, iron, bricks, timber, peat, stone and grain but also cheese, malt, tobacco and spirits, and many settlements along the Kennet and Avon Canal such as Newbury, Kintbury and Hungerford prospered from the connections. New settlements and businesses were also created, for example at Aldermaston Wharf.

The fortunes of the canal waned with the coming of the railways in the 1840s, when freight began to be transported by faster methods, and in fact, the Kennet and Avon Canal was bought by the Great Western Railway company in 1852, effectively killing any competition.

By the early 1950s, it was no longer possible for a boat to pass from Reading to Newbury. But plans in 1954 to close the canal to Bath were met with opposition, and the Kennet & Avon Canal Trust campaigned for the preservation of the waterway.

Restoration started in the 1960s and the canal was reopened in 1990, with further money coming later from the Heritage Lottery Fund to complete the works needed. As well as now being a popular watercourse for narrowboats and cruisers, the canal provides walking and cycling routes along its towpaths.

Many of Rennie’s designs can be seen, for example, the listed bridges with integral locks between Hungerford and Newbury at Dun Mill Lock, Brunsdon Lock, Dreweatt’s Lock, Hamstead Lock and Guyer’s Lock.

Also of interest from the earlier Navigation era in West Berkshire are the restored turf-sided locks at Monkey Marsh, near Thatcham Railway Station and Garston Lock. Newbury’s Corn Stores building (part of the West Berkshire Museum) was built on the Kennet Navigation Wharf sometime after 1723 and is an extremely rare survival of a canal-side structure. Bridge Cottage, a private house in Woolhampton, is another former canal warehouse.

The strategic importance of the Kennet and Avon Canal was recognised during the Second World War when it marked a Stop Line against an anticipated German tank invasion. Pill boxes were constructed along the canal in 1940-1, most of which survive to add another layer of history to a visit. The set of Defence of Britain structures around Dun Mill near Hungerford are particularly significant militarily.